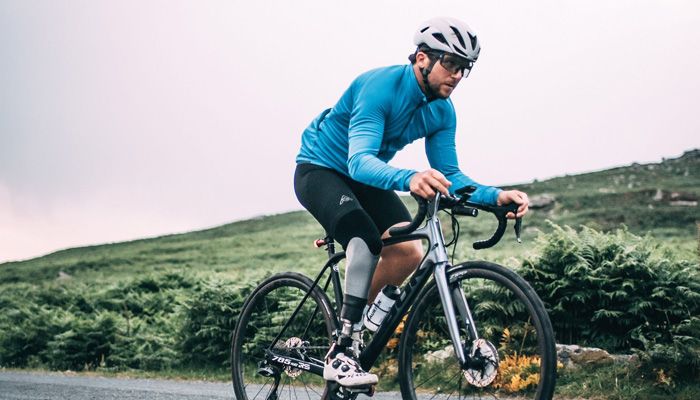 A University of Manchester graduate today started his 2000km endurance cycle, spanning the length of the UK, to raise money for the memberless veterans’ charity Blesma.

Stuart Croxford, former Captain of the Duke of Lancaster’s Regiment, served on three operational tours in Afghanistan and Iraq.

In 2012, Stuart suffered serious foot injuries when his vehicle struck an improvised explosive device (IED) in Afghanistan, and a subsequent accident in 2014 resulted in the amputation of his right leg below the knee.

Determined not to let his injury hold him back, he set his sights on the BASI ski instructor qualification, which he completed four months after the amputation. It was just one of many major challenges he undertook after his injury, pushing the limits of life and endurance. He went on to complete a full Ironman, the London Marathon and numerous 100 mile cycling challenges.

This 2000km charity cycle will take Stuart from Land’s End to John o’ Groats, through 21 counties in England, Wales and Scotland. From May 9, Stuart will cycle for up to 20 hours a day through Truro, Exmoor National Park, Quantock Hills, Bristol, Brecon Beacons National Park, Manchester, Yorkshire Dales, Stirling and the National Nature Reserve of Ben Lawers.

Stuart, an architecture graduate from the University of Manchester, said: “Riding this distance and duration with little rest would push an able-bodied cyclist to the limit, both physically and mentally.

“As an amputee, this will add additional stress and factors that I will have to reflect on and overcome on a daily basis. I have never put so much stress through my residual limb and my prosthesis, so I will ride into the unknown.

“To meet this challenge, I will have to rely heavily on my own resilience to get through very difficult times. My motivation will come from the knowledge that funds will be raised for a fantastic charity that provides lifelong support to veterans and their families suffering from loss of limb or loss of sight.

Inspired by Stuart’s story, electric vehicle company AVA has developed an electric Defender in his honor – the Croxford Defender. Designed to tackle the toughest terrain, the vehicle will serve as Stuart’s support vehicle during the challenge. The vehicle itself was built in cooperation with Stuart, with bespoke interiors reflecting his life.

AVA Founder Norman Crowley said: “The AVA Croxford Defender celebrates Stuart’s remarkable history of resilience and positivity. The vehicle is AVA’s tribute to Stuart’s incredible courage and determination in the face of adversity.

Blesma is the only national charity that provides injured and limbless veterans with lifelong support. Established in 1932 after World War I, the charity has helped more than 63,000 injured veterans over the past 90 years. This year, Blesma celebrates 90 years of supporting limbless and injured veterans.

This challenge will raise vital funds for Blesma, who are dedicated to helping military and ex-military personnel who have experienced life-changing limb loss and loss of limb use.

Blesma currently supports 3,000 members, including limbless and injured veterans and their widows, to lead independent and fulfilling lives, by providing them with emotional, practical and financial support. Stuart has been a director of Blesma since 2020. Stuart hopes the cycle will raise £50,000 for the charity.

Members of the public can donate through the JustGiving visit here.

Get all the latest news, updates, things to do and more from Manchester, Greater Manchester’s dedicated InYourArea feed.