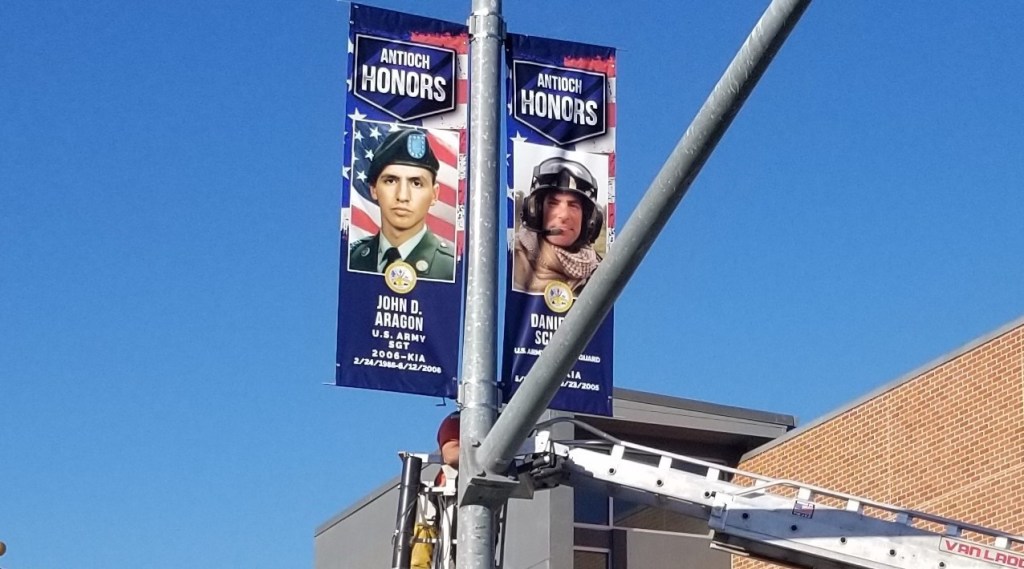 In an effort to honor the many veterans who once called Antioch home, the Delta Veterans Group (DVG) has endeavored to continue adding to the Antioch City Veterans Memorial Banner program. This year, the group added 72 new banners along lamp posts and poles throughout the city.

“The top eight were up on Memorial Day 2019,” said Tom Menasco, a volunteer chair of the program. “We were able to add 72 more banners to the city this year.”

Menasco said the program is offered free of charge to honor and remember deceased veterans who lived within the city limits of Antioch. The veteran’s status must be verified. Each banner is funded by local business sponsorships and private donations. Martha Parsons of Antioch requested to add one of the new banners to feature her grandfather, Joseph G. Viera Sr., who served in World War I.

“I’m so excited about the Veterans Banner program in Antioch,” she said. “We owe our veterans so much. I’m so proud to have my grandfather’s World War I on one of the banners, and I’ve entered photos and information about my mother Eleanor’s service since she was in the WAVES during the Second World War.

Another Antioch resident, Susana Ameli, is also grateful for the opportunity to add a banner. She placed one in honor of her brother, Verle Wenneker II, who was a United States Marine Corps sergeant from 1965 to 1968 and died in 2018. Menasco said the banners will remain in place for 18 months to make way for other banners. new applications from veterans submitted.

DVG Founder and President JR Wilson said his organization even helps family members complete the necessary paperwork to request their loved ones’ service records as proof of service.

Poles with banners can be seen from downtown on L Street at the 10th Street intersection to the Highway 4 intersection. There is also a pole in front of the Antioch Historical Museum, and there are four posts at Antioch High School with dedications to two former Antioch High School students who died in Iraq. Staff Sgt. Daniel Ronald Scheile, 37, served in the Army National Guard and was killed Sept. 24, 2005, and Sgt. John David Aragon, 22, served two years in the U.S. military before he was killed on June 12, 2008. For more information on the banner program and sponsorship information, see the DVG website at the address deltaveteransgroup.org.

There will be no parade this year for Antioch’s regular Veterans Day celebration, but the DVG will host a special drive-in service beginning at 10 a.m. on November 11 during which visitors can sit in their vehicle at the Antioch Veterans Memorial at the Antioch Marina and tune their radios to 87.9 FM to hear the service. The DVG asks everyone to plan to be parked before 9:50 am. The group will then be free to take a self-guided tour through Antioch of the various memorials. For up-to-date information, check the DVG Facebook page at facebook.com/DeltaVeteransGroup.

The ceremony included presentations from the City of Oakley; the Oakley Seniors Club; the Rotary Club of Oakley, which spearheaded the project; the American Flagpole Co., which installed the mast and paid for most of the project; and Oakley Veterans, who meet weekly at the site and made the first cash donation to the project. For those interested in learning more, Oakley Veterans meet every Tuesday morning at the Oakley Senior Center. For information on joining the organization, contact Allan Perry at 925-783-0818.

Roni Gehlke can be contacted at oakleynow@comcast.net.