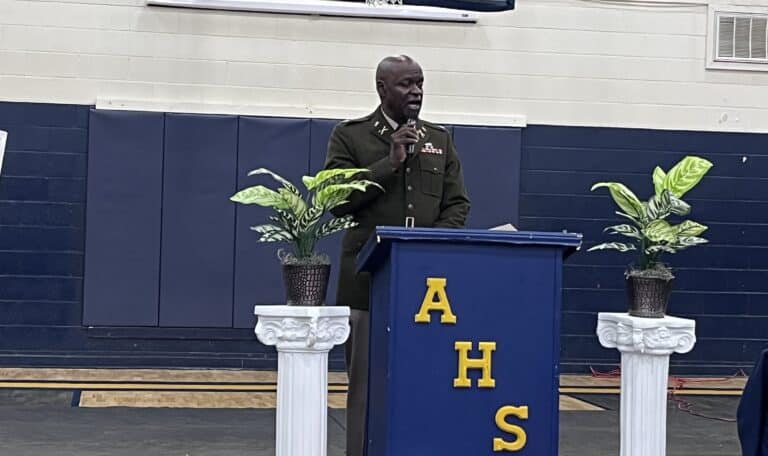 SEE MORE PHOTOS IN THE GALLERY BELOW.

The Autaugaville School Student Council hosted a Veterans Program on Monday, November 7, 2022 to honor local veterans and military personnel. The assembly included speakers, music and ended with the reading of “Taps”, then special guests were invited to attend a reception immediately after the ceremony.

The ceremony was led by Grade 9 Class President Tori Parker as the Master of Ceremonies. She hosted masterfully and the program ran smoothly. Prattville High School JROTC and MSgt Larry Smith attended and assisted in the presentation of the colors while Autaaugaville students, 11th graders Makasiah Burns, Zacarria Phillips and 12th grader Arianna Steele sang a beautiful rendition of the anthem national.

Alabama State District 69 Representative, The Honorable Kelvin Lawrence, was asked to share his thoughts on the importance of Veterans Day and told assembly attendees why we should have gratitude for all who served. Next, the “Armed Forces Medley” was played and all attendees were asked to stand when their branch song was played. At the end of the song, 9th grader Kevee Tyus then recited a moving poem by famed Harlem Renaissance poet Melvin B. Tolson titled “The Unknown Soldier.”

The Autaugaville school invited Lt. Col. Dr. Cleveland Gavin to be their guest speaker and he ordered the room accordingly. Dr. Gavin spoke about the importance of community involvement and how students should start caring about their community now. He expressed his gratitude for what the military has done for his life and how he appreciated all that he was able to do through his service in the military. He encouraged students to consider joining the service, but most importantly encouraged them to care about the community they live in and really get involved in making it a better place to live and raise families, telling them that it started and ended with them.

When he finished, he received a standing ovation, and then the program continued. Parker explained what a folded flag represented and why folded flags were given at military funerals. She asked everyone to stand still as a rendition of “Taps” was played to honor those who gave their lives in service to the United States. Autaugaville School Principal Rodrick James took the floor and gave closing remarks while explaining that he had children who are currently serving in the military and thanked everyone who attended.

Autaugaville school care and all military service members are appreciated.