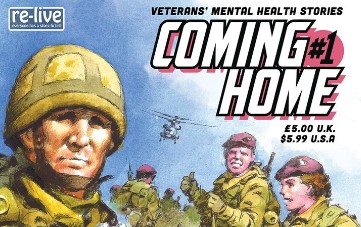 Health charity Re live is due to launch a comic book series later this year to help highlight mental health issues faced by veterans, including post-traumatic stress disorder (PTSD) and depression.

The comic is called Coming Home, with each issue available in the UK for £5 and in the US for $5.99.

Several established creators from the comics industry are involved, with covers painted by the late artist Ian Kennedy, whose credits include Dan Dare, Commando and 2000AD. These were completed shortly before his death earlier this year

The traumatic stories were adapted from the real experiences of the charity’s veterans’ group to develop their own narrative and work with a professional cartoonist to bring it to life as a finished story.

The first issue is published in November and can be pre-ordered from September.