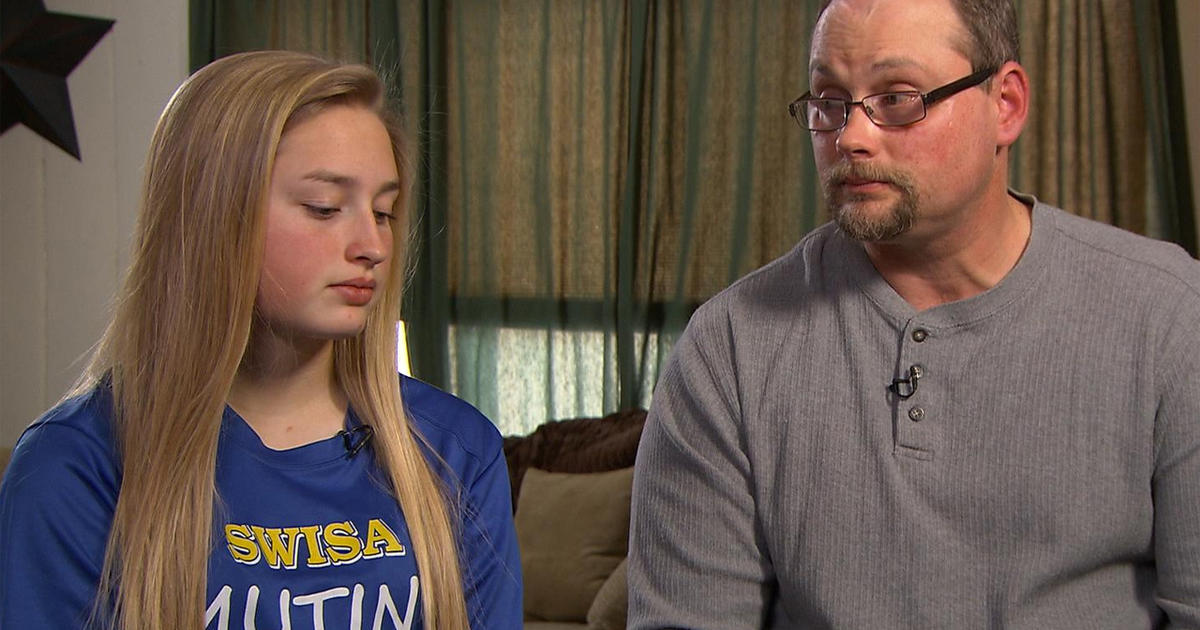 Not all of our war wounded have served in combat overseas. Some are children who have never left our shores. Collateral damage, some would say. Our Martha Teichner cover story:

How many of these homecomings have you seen on TV since we went to war in Iraq and Afghanistan over a decade ago? How many children, looking into the eyes of a returning soldier for the parent who left?

These are meant to be happy endings, happily ever after times. But often they are anything but.

“Before his deployment, he was still a fun parent,” said 15-year-old Abigail Barton, who lives in Newburgh, Indiana. Her father, Aaron Barton, is an Iraq War veteran.

“I just figured he’d come home and start, like before, taking us to the park, playing basketball, buying ice cream, all that stuff,” Abigail said. “And it just immediately changed, it was completely gone.”

“Yeah, I was scared to get out of the house at that time,” Aaron said. “Crowds make me nervous. I’m always on the lookout for snipers.”

Barton was an Army National Guard specialist. His two deployments to Iraq, in 2005 and again in 2007, left him with brain and spinal injuries, and post-traumatic stress disorder. He is able to work as a butcher for a local supermarket, as long as he works alone.

“I’m just getting to a point where the rage takes over,” Barton said. “I can’t control this. It’s like a Dr. Hyde-Jekyl thing, you know? It scares me almost as much as they do.”

When asked what he says to his children when something happens, Aaron replied, “I usually say, ‘Leave me alone.’ I would never intentionally hurt them.” Facing his daughter Abigail, Barton said, “You are my life.”

The stories of veterans’ lives shattered by PTSD are all too familiar to us – the struggles of their children virtually unknown.

“I would be so angry,” Abigail said. “I was just like, ‘This is what Iraq did to my father.’ I’d start blaming the American military, you know? I’d say, “You robbed my dad.”

“So yeah, I developed depression over time and a lot of anxiety.”

“Does your school understand? asked Teichner.

“No, no. I didn’t get any help at school. All my help, I guess, for depression and anxiety comes from somewhere else – through our family doctor.”

Abigail Barton’s brother, Alex, is 18 and feels uncomfortable talking on camera. A year ago, he attempted suicide and spent four days on life support.

How did it go for Alex, Teichner asked. “Devastating, devastating,” said his mother, Wendy Barton, “to see the changes in his father and to feel helpless.”

“I don’t think America is intentionally neglecting these kids, but I do think they need to wake up,” Wendy Barton said, “because this is a real problem, and it’s certainly not just my kids who are Suffering.”

It is estimated that up to five million children have had a parent or sibling who has served in Iraq or Afghanistan since 9/11.

Ron Avi Astor, professor of social work at the University of Southern California, said: “The vast majority of children and families, even with many deployments and many moves, around 70% or more depending on the problem you ‘ I look, it’s going well.”

But Astor says the remaining thirty percent – up to one and a half million children – are not doing well. He studied 30,000 high school students in eight California school districts. Particularly disturbing: Astor found that one in four military children are likely to consider suicide, far more than non-military children.

And what does the Veterans Administration do for the children and siblings of people who have returned from the war? Not much, Astor said.

The VA spent nearly $500 million last year on PTSD treatment for veterans from Iraq and Afghanistan. But family members (a VA spokeswoman informed us via email) may receive counseling “if deemed essential to the veteran’s effective treatment and readjustment.”

In other words, the children of veterans who have psychological problems are largely on their own, if they receive help.

Abigail Aaron said that every day when she walks through her door, she takes her “normal” act: “It’s like putting on a shirt now. It’s incredibly easy. Just walk out, smile.”

His experience is typical. His salvation was football.

“Every time I step onto the court or whatever, all the stress goes away,” Abigail said. “I only think about the game, you know?

Christal Presley told Teichner, “My mother had asked me not to talk about the things that were going on with my father. In fact, if my mother mentioned the word Vietnam, it was with a whisper.”

Soldiers’ children can be collateral damage in our country’s wars — all of their lives. Presley said: “I felt very suicidal, very depressed, very angry, anxious.”

Until, at the age of 30, Christal did what terrified her the most: she asked her father, a Vietnam veteran with PTSD, to tell her about the war.

“Why do you think at that time he said yes?” asked Teichner.

“Well, I know now that it was also because he felt like there was a hole in his soul too and he never really knew his daughter.”

Delmer Presley returned to rural Virginia broken by the murders he witnessed and participated in in Vietnam, and by the hatred he encountered upon returning home.

When he couldn’t control himself, he would lock himself in his room and play the guitar, or just face the wall.

“I was ashamed of myself,” he said. “I thought the rage would come out, I might hurt someone or something, you know?”

“So while my dad was hiding in his room, I was locking myself in my room,” Christal said. “I oscillated between depression and rage, just like my father.”

It was as if she too suffered from PTSD, and by her own admission, it was eating her alive, when she picked up the phone for the first time in 30 phone calls.

“He said, ‘I don’t want to talk about war, I don’t know anything about a war,'” Christal said.

And what was his response?

“We hung up the phone, and slowly but surely over the next few weeks he started to really open up to me.”

Teichner asked Delmer, “Do you think these conversations helped you?”

“Oh yeah, yeah,” he replied. “I mean, sometimes when you have an episode, I just want to call and talk to him, and that helps, you know?”

After a life of not telling anyone, Christal Presley dared to go public, in a blog that – to her astonishment – went viral, and eventually became a book,

She has received emails from thousands of veterans and children of veterans as far back as World War II. She started a website and a Facebook group called United Children of Veterans.

“I think a part of me still feels the relief of ‘Christal, you’re not alone,'” she told Teichner. “And the other part of me feels so sad, because I was not alone.”

Counting the small victories, Christal Presley no longer sees herself as a victim of her father’s war, but as a survivor.

When asked what was the best thing that came out of her phone conversations with Christal, Delmer replied: “For me, knowing that, I hope she knows that I love her and have her. always loved.”

The “secondary” victims of PTSD: the children of veterans