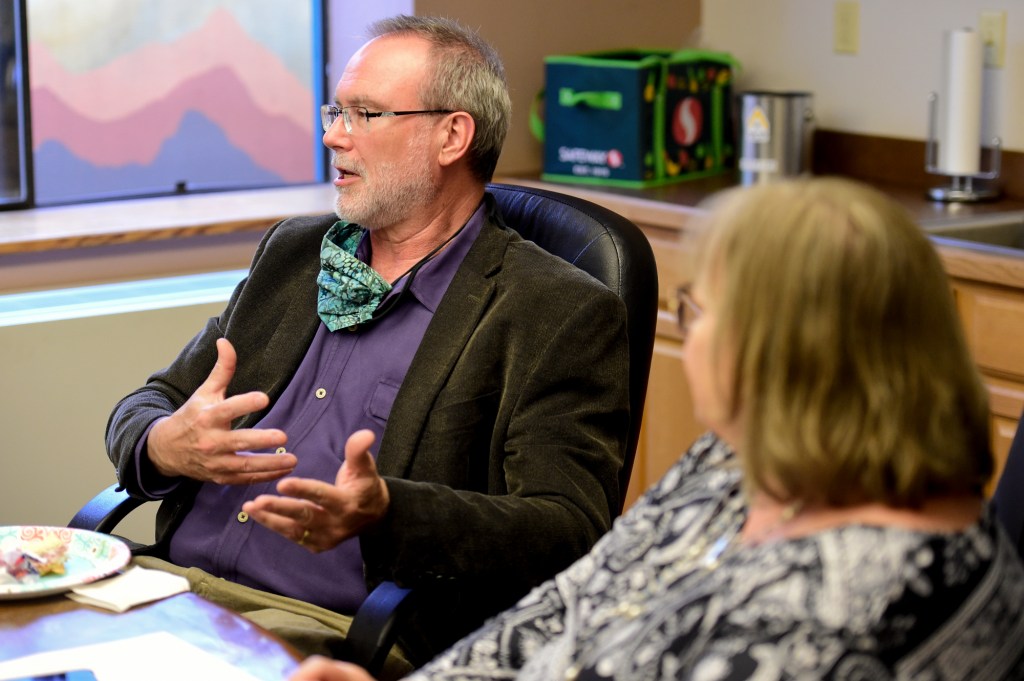 Since arriving in Boulder County about two years ago, the Veterans Community Project had been looking for a brick-and-mortar place to call home.

The non-profit association, which innovated last year on a community of small halfway houses for homeless veterans, also helped provide basic services to its clients – while working from their cars and temporary offices.

This week, the Kansas City-based nonprofit got the chance to officially set up shop in Longmont. The Veterans Community Project moved to 1228 Main Street, the former location of the Longmont Housing Authority. Paul Melroy, executive director of the Veterans Community Project Colorado, said while it has no physical location, the nonprofit has helped 19 veterans find housing and served 110 veterans l ‘last year. Having a home base will give the nonprofit the power to provide services to even more people, he said.

The approximately 2,000 square foot building, which is ADA compliant, will be a place for veterans to enter for assistance with services and a base for case managers working on the street.

“We’re a people company and it’s very difficult to do what we do remotely,” Melroy said. “We really cannot serve homeless veterans remotely. We’re used to a lot of face-to-face interaction, including among our staff. It’s amazing after over a year for all of us to be in one place.

Harold Dominguez, city manager and executive director of the Longmont Housing Authority, said the lease between the city and the Veterans Community Project was finalized this week.

“As we look at the work we all do in terms of serving homeless people, I think it’s great that they have a place to operate and serve homeless veterans,” Dominguez said. “We can’t wait to see them complete their other project with the Tiny Homes and become another organization we partner with to serve our community.”

Melroy said staff hope to open the Main Street office by June, with an open house scheduled for July.

About half a million dollars in donations are still needed

The new office location has already been put into operation this week. Gathered around a table on Thursday, staff from the Veterans Community Project gathered alongside members of the Veterans Housing Coalition on Thursday to share updates, including the progress of the small community of homes for veterans facing homelessness. The coalition formed in 2018, after Longmont City Council members voted to participate in the Mayors’ Challenge to End Veteran Homelessness — a national appeal to help homeless veterans. Its members have also worked to help veterans, including working with the Veterans Community Project.

The small community of homes will be built on approximately 2 acres of property located just off South Anderson Street near Rogers Road and west of Hover Street. HMS Development developers are donating the land and infrastructure for the project.

Jake Spencer, a partner at HMS Development, said final construction drawings have been returned and submitted to the city. Although he said it was too early to announce official construction dates, he said he expected work to begin later this month or early June.

“We’re going to get started and hopefully not have to stop until we build houses,” Spencer said.

The small community of homes would cost around $5 million to build. Melroy said about half a million dollars is still needed, with donations coming from businesses, churches, individuals and foundations. He said each of the homes are sponsored for around $35,000 each. The Veterans Housing Coalition is also sponsoring a home and working to raise another $10,000 in donations by the end of June. Individuals wishing to donate to the effort can visit the Longmont Community Foundation website at: longmontfoundation.org and select donate, then “Veterans Village” or donate on the VCP website at: veteranscommunityproject.org.

The village will include 26 mini-homes, including five 320-square-foot family units and 21 240-square-foot single-family homes. The houses will be complete with furniture and appliances. Veterans will also have access to case management, with the aim of helping them transition from the small house and find permanent housing. A 3,000-foot community center, where veterans can find support services, is also part of the community design.

The village is also part of a larger development on approximately 65 acres that will include the construction of eight Habitat for Humanity homes and 450 adjacent condos, townhouses and single-family homes.

The Veterans Community Project was founded by veterans, with the goal of helping every man and woman who has sworn an oath to serve their country, regardless of their place of service or discharge status.

“We are extremely excited to open another location where we can have walk-in clientele,” Meyer said. “But more importantly, to thank everyone in this room who contributed to the momentum and immense capacity it takes to achieve something like this.”

Donate to the Longmont Community Foundation “Veterans Village” to help the Veterans Housing Coalition sponsor a tiny house at: longmontfoundation.org

Sign up for volunteer opportunities or donate to: veteranscommunityproject.org/vcp-colorado