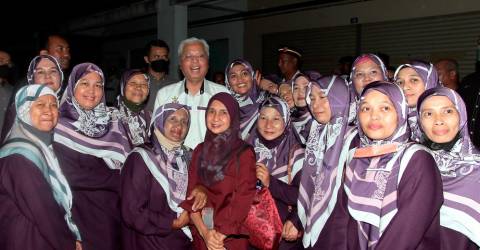 Free education at UniRazak for 2,500 children of veterans: PM

BERA: Children of armed forces veterans will be given the opportunity to continue their studies at Universiti Tun Abdul Razak (UniRazak) free of charge for one year, with the costs borne by the university, Prime Minister Datuk Seri Ismail Sabri has said Yaakob.

He said the program would involve 2,500 children of veterans over a five-year period at a cost of RM12,500 per student for the one-year period, after which the students concerned can opt to stay at the university. or move to study elsewhere. .

Ismail Sabri also said the government had agreed in principle to grant RM500 support to those caring for bedridden spouses, in a move that was first discussed when he was Defense Minister.

“The government has never forgotten the deeds of veterans for the country and we will certainly help in every aspect we can to ease their burden. We want to ensure that the welfare of veterans is protected because they have risked their lives to defend the country.

“I am always open to meeting with all parties to discuss issues regarding veterans affairs, as this issue is close to my heart,” he said at the opening of the Veterans Association administrative office. Bera Branch Malaysian Armed Forces (PV ATM) fighters in Taman Merbau Indah. here yesterday.

The Prime Minister said the Department of Housing and Local Government has pledged to provide a special quota for veterans and defense personnel in its affordable housing projects.

Ismail Sabri said he had also applied for a special allowance for veterans under the 1,000 house construction project under the Perumahan Rakyat (PPR) program in Bera.

“One of my priorities after becoming chief defense minister was the housing issue,” he said.

He said armed forces personnel and veterans should be assured that their families would always have comfortable accommodations.

During the ceremony, the Prime Minister also approved a stipend of RM20,000 for the Bera Armed Forces Veterans Association, which has been operating since 2016. — Bernama

Free education at UniRazak for 2,500 children of veterans, says PM