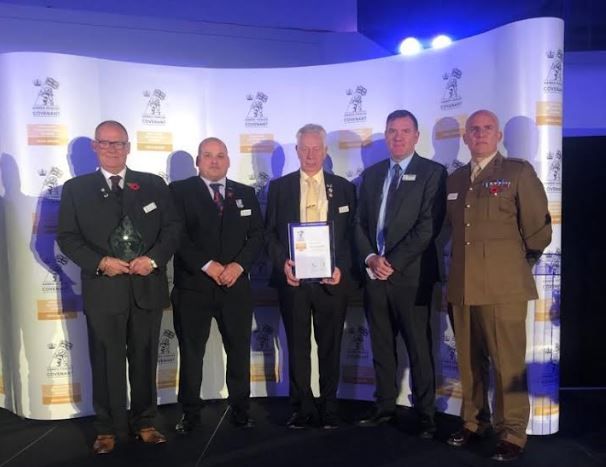 Veterans into Logistics, a Heywood-based non-profit organization set up to help ex-servicemen obtain heavy truck licenses and help them find gainful employment, received the award from the Department’s Employment Recognition Program of the defense.

The charity’s founder, Darren Wright, received the award from Major General Marc Overton, Deputy Chief of the Defense Staff during a special ceremony held at the Concorde Center in the Manchester Airport.

Darren founded Veterans into Logistics following the death of a former close friend in the military, Sergeant Jamie Doyle.

“We are proud of everything we have accomplished in our first two years, successfully training or supporting hundreds of former military personnel into new careers as heavy truck drivers.

“We have been able to place many people in leadership positions with respected logistics companies including Asda, Muller Dairies and XPO Logistics, whom we thank for partnering with us and for appreciating the commitment and dedication brought by the employment of veterans.”

To receive the Gold Award, employers must proactively demonstrate their strengths-friendly credentials.

This includes signing the Armed Forces Covenant, which is a pledge by the nation that those who serve or have served in the armed forces, and their families, are treated fairly.

Greater Manchester Mayor Andy Burnham said: “I was very pleased to hear about the Veterans Into Logistics Gold Award under the MOD Recognition Scheme.

“They join a partnership of organizations that are striving to make GM the best place for veterans to live and work in the country and I believe they will continue to get better and better.”

Chris Clarkson, MP for Heywood and Middleton, added: “It is fantastic to see the incredible work of veterans in logistics being honored with a Gold Award.

“Darren and the VIL team are changing lives for the better through their work and giving our fighters, men and women, a fighting chance on the civilian streets.”