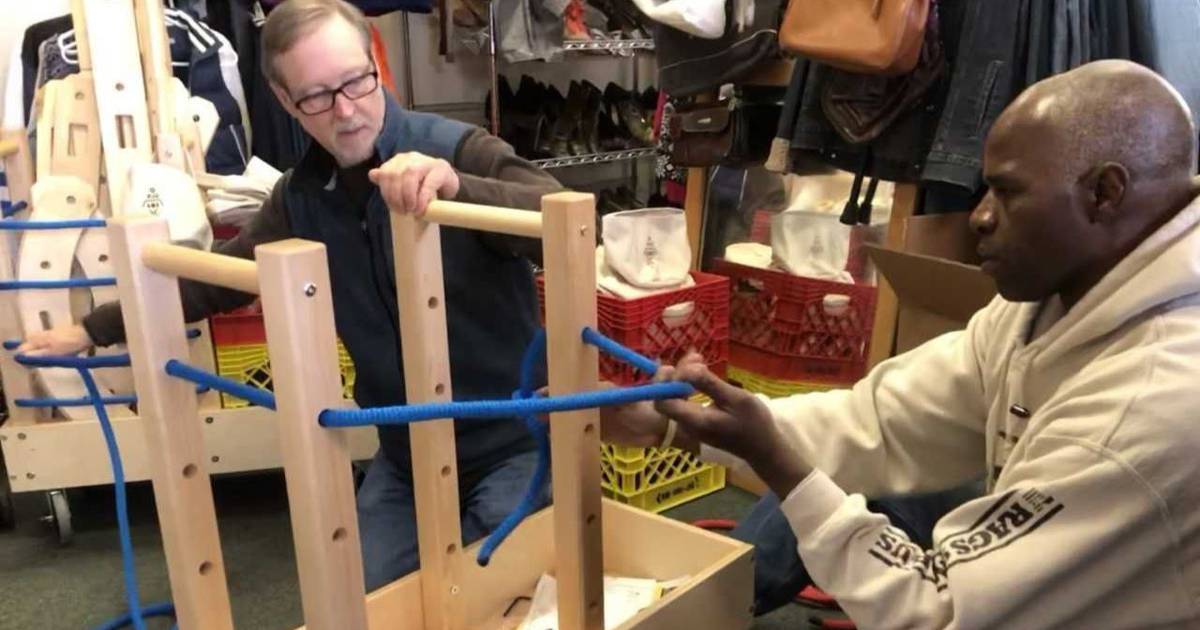 Children who visit the Midwest Veterans Closet in North Chicago will soon have a new way to entertain and play while learning.

On Tuesday, the nonprofit that provides veterans and active-duty families with quick-response items — such as food, clothing and household items — will unveil the latest addition to its resources: a Rigamajig.

The device is a construction kit in two mobile carts with play stations that contain a collection of large-scale wooden planks, wheels, pulleys, plastic nuts and bolts, and rope.

The Rigamajig was designed to spark the imagination and inspire children to think outside the box by educator and designer Cas Holman.

“When I was growing up, STEM was just letters of the alphabet,” said Midwest Veterans Closet founder Mary Carmody. “Now these toys are tools children use to learn science, technology, engineering and math.”

On Thursday, veterans Terry Devanie of Mundelein and Alex Bradley of Chicago sat cross-legged on the floor of a room at the Midwest Veterans Closet, where they volunteered, assembling the hundreds of wooden and plastic pieces, preparing the carts for Tuesday’s event.

The two worked to put pieces together and build things they couldn’t name with red and blue rope they pulled through small holes in the wooden planks.

“We maybe have more fun than the kids,” Devanie said – to which Bradley replied, “We’re just big kids anyway.”

Adding that the facility had a box of donated toys for children to play with while their parents picked out the items they needed, Carmody said most of the toys were taken by little ones who didn’t want to part with them. at the end of their visit.

“We’re happy to be the chosen veteran organization to receive this, and I’m excited to see what the kids will create with it,” Carmody said of the Rigamajig.

Once the weather warms up, Carmody plans to deploy the kits outside and invite children in the community to play with them, she said.

According to information provided by the Veterans Closet, the Rigamajig is one of 10 exclusive gaming products granted by the national nonprofit KaBOOM! and the CarMax Foundation.

The CarMax Foundation and KaBOOM! have partnered to showcase their grants across the country during “Play Week” April 9-13 and are also working to build a playground in Seattle that will benefit the children of military families.

“As a veteran, I personally understand how important it is to support military communities and the CarMax Foundation is honored to grant this play equipment to the Midwest Veterans Closet,” said Kurt Lynne, General Manager of the Schaumburg CarMax.

The Midwest Veterans Closet was the only Illinois organization selected to receive the Rigamajig, Carmody said.

The Rigamajig unveiling ceremony is scheduled for 4 p.m. on Tuesday, April 10 at the Veterans Closet, 2323 Green Bay Road in North Chicago.

Lake County Schools Regional Superintendent Roycealee Wood is expected to attend, along with veterans and their families. The event is open to the public.

Yadira Sanchez Olson is a freelance journalist for the News-Sun.

Violence hits a veterans program that worked to prevent it