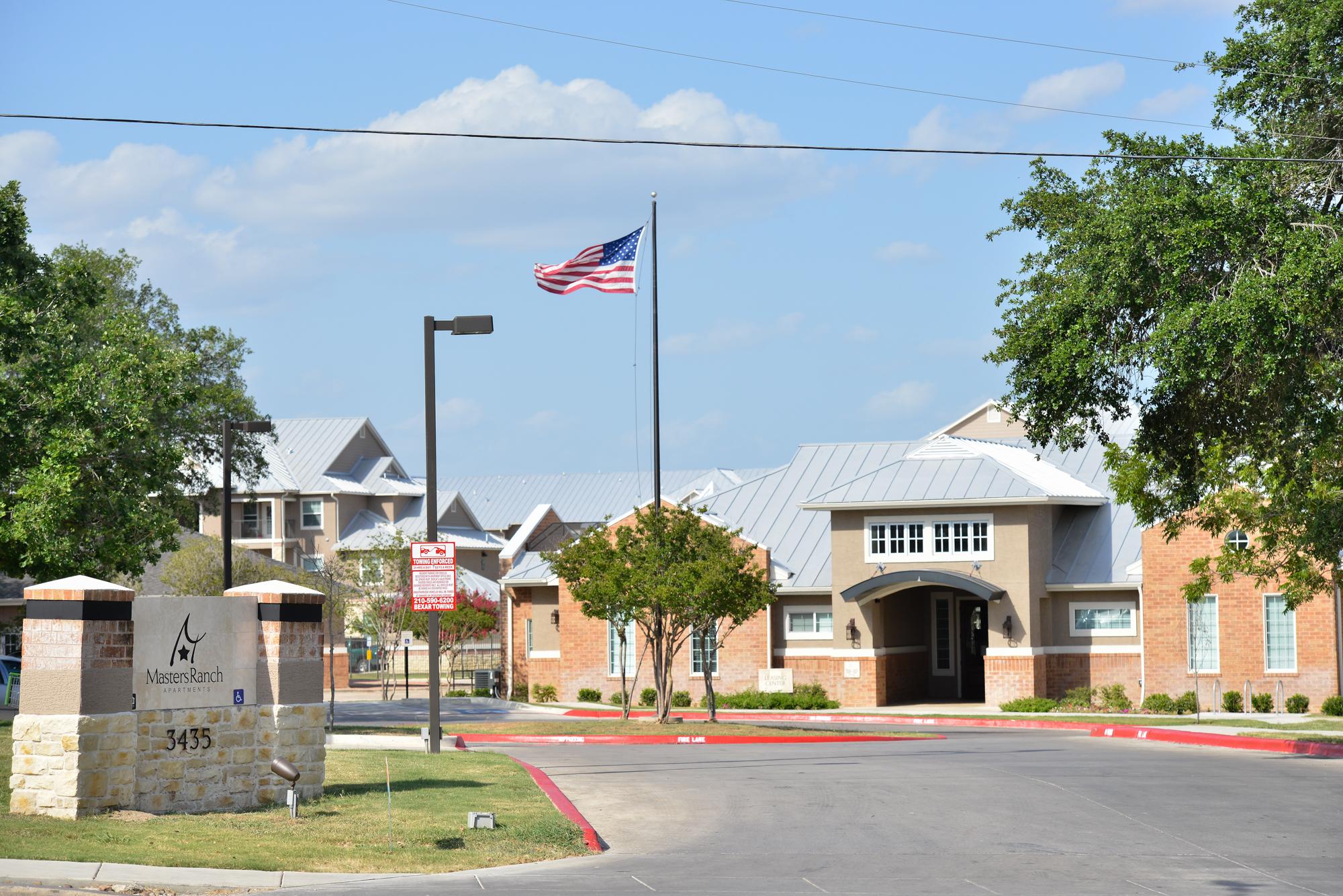 Masters Ranch opened last year as an apartment complex “dedicated to the transition veterans make from military life,” according to the Facebook page for Valor Club, its planned community.

The resort, to date, is the only completed component of Valor Club, a 215-acre venture in the Southeast that developer Dan Pedrotti Jr. says will be the first large-scale community in the United States focused on veterans. His idea is to transform the historic Pecan Valley Golf Club into a community that would make civilian life easier for veterans by providing housing around amenities such as a handicap-accessible golf course, BMX race track and counseling and vocational training services.

The goal is for 100 percent of the community’s 1,400 homes to be occupied by veterans and their families, Pedrotti said.

Still, it’s unclear how many veterans live at the Masters Ranch, and many Southeast residents and leaders worry that Pedrotti is breaking his promise to keep the focus on veterans.

Local developer Mike Hogan, who built Masters Ranch in partnership with a city nonprofit using federal affordable housing tax credits, said in a phone interview that 130 of his 252 tenants are “veteran-related,” but declined to say how many actual veterans live there.

When asked to clarify what “veterans-related” means, he replied, “I won’t go any further than that. You can print it or not print it,” before hanging up.

He later said in an email that the resort includes “approximately (still changing) 130 families” with family members who are in the military or who are veterans. He is marketing the resort to veterans organizations and expects more ex-servicemen to move in as construction progresses on the rest of the Valor Club, he said.

“We want good responsible housing on the southeast side. We want veterans housing, that’s for sure,” Gutierrez said. “But people have to be very open and honest about what they’re doing. We felt that we had not had an open and honest discussion because our questions simply had not been answered.

“This project is now and always has been dedicated to the transitional needs of American military veterans and their families,” he said.

The Valor Club has faced opposition since Pedrotti started working there six years ago. He said he was inspired to build a community of veterans around a golf course after seeing disabled veterans enjoying a round of golf and realizing it could work as a form of therapy.

The veterans “had this gigantic community, the largest on the planet, for years and years, and everything they needed was there,” he said. “Now left on their own, they need to regain some sense of that camaraderie and community. And they need to know that their family is in a good, decent, safe, and dignified place.

But residents who live near the development site, many of whom are ex-military and have lived there for decades, worry the project will create too much density among the area’s humble ranch-style homes and retail businesses. local.

It will be built on a portion of the Pecan Valley Golf Club that Pedrotti and his business partners closed in 2012, much to the chagrin of many in the community.

Critics say the project would clog the area with traffic, overload its schools and cause flooding on Salado Creek. About 40% of the land owned by the development team is in a floodplain, according to the Bexar Assessment District.

They feel they have been misled about Masters Ranch, which they believe has contributed to an over-concentration of low-income housing in the area. The complex was built through a partnership with the San Antonio Housing Trust Public Facility Corp., a city nonprofit that promotes affordable housing, so it has full property tax exemption.

“It has to do with the integrity and character of the neighborhood that has existed for many, many years,” said Toni Moorhouse, president of the Pecan Valley Neighborhood Association.

The community has lost faith in the project over the past six years as the developer’s vision has not materialized and the Pecan Valley Golf Club has deteriorated, Gutierrez said. Famous for hosting the 1968 PGA Championship, the property is now unrecognizable as a golf course, its fairways overgrown with weeds and cart paths half-covered in dead yellow grass.

Pedrotti said the project’s lengthy planning phase is typical of a development of this size and complexity.

“The idea that it took five to six years for promises to be broken is just a misunderstanding,” he said. “These things take a very, very long time, and there is a right time to do them and a wrong time to do them. Right now the demand for this thing is increasing, not decreasing. »

Masters Ranch is just the beginning of his vision for The Valor Club. It is partnering with Irwin Deutch, a Beverly Hills-based multi-family developer, to build about 1,400 residential units, including about 1,000 apartments, as well as retail and a 200-room hotel and event center. Another project partner is Bill Deutch, the creator of “Hire America,” a television show that follows returning veterans looking for work.

In addition to the nine-hole golf course, the community is expected to include disability-accessible amenities, such as a BMX circuit and a sports facility known as “Valordome”.

The first stage of the project is to rehabilitate nine holes of the golf course and make them accessible to people with disabilities, Pedrotti said. He expects the work to be completed by next summer and the rest of the community to be built in stages over many years.

Last month, city council approved zoning changes for the community. The city and the San Antonio River Authority, working on behalf of the Federal Emergency Management Agency, have yet to analyze the project’s impact on the area’s drainage and flooding.

“This is going to bring back that economic revitalization that we’ve been looking for in this corridor for some time,” said District 3 Councilwoman Rebecca Viagran. “This will be a development that will actually increase the fiscal role of school districts.”

Pedrotti said the community will add money to the southeast side’s tax roll, help create new infrastructure, and catalyze further redevelopment. The region is already gaining momentum, he said. A Walmart was recently built across from the development site, and Methodist Healthcare System is strengthening its presence in the area, he said.

“What you’ve seen on the East Southcross corridor, for decades, is money going,” he said. “We will be the last and greatest catalyst in the area, and we intend to engage and be a good, positive member of the Southeast San Antonio community.”

The original plan was to develop the golf course as part of a non-profit organization which Pedrotti founded in 2013. But it was difficult to raise funds from the non-profit organization. It is therefore currently being built by The Valor Club Partners, a company created last year and controlled by Deutch’s company, Pacific Century Propertiesshow documents filed by state enterprises.

The nonprofit organization raised about $402,000 in 2015 and 2016, according to its filings with the IRS. He has yet to make a charitable donation, devoting his expenses to fundraising and planning and engineering for the planned community, Pedrotti said.

In addition to serving as president of the nonprofit, Pedrotti expects to have a stake in the for-profit enterprise that grows the community. There was no conflict between the work the nonprofit has done on behalf of the planned community and the revenue the company will derive from it, he said.

“The conflict doesn’t exist because one was made without the notion of the other,” he said. “That money was spent to maintain the current design and move forward, before we met Irwin Deutch and before there was anything like a joint venture.”

He said he plans to fund the nonprofit with a portion of the company’s profits. The nonprofit would create an endowment that would be used to subsidize rents for veterans who live at the Valor Club, he said.

For those who doubt he will deliver on his promises, Pedrotti has a message: Wait and see.

Richard Webner is a staff writer for the San Antonio Express-News. Read more of his stories here. | rwebner@express-news.net | @RWebner

Tennessee officials and FTC to crack down on veteran charity scams