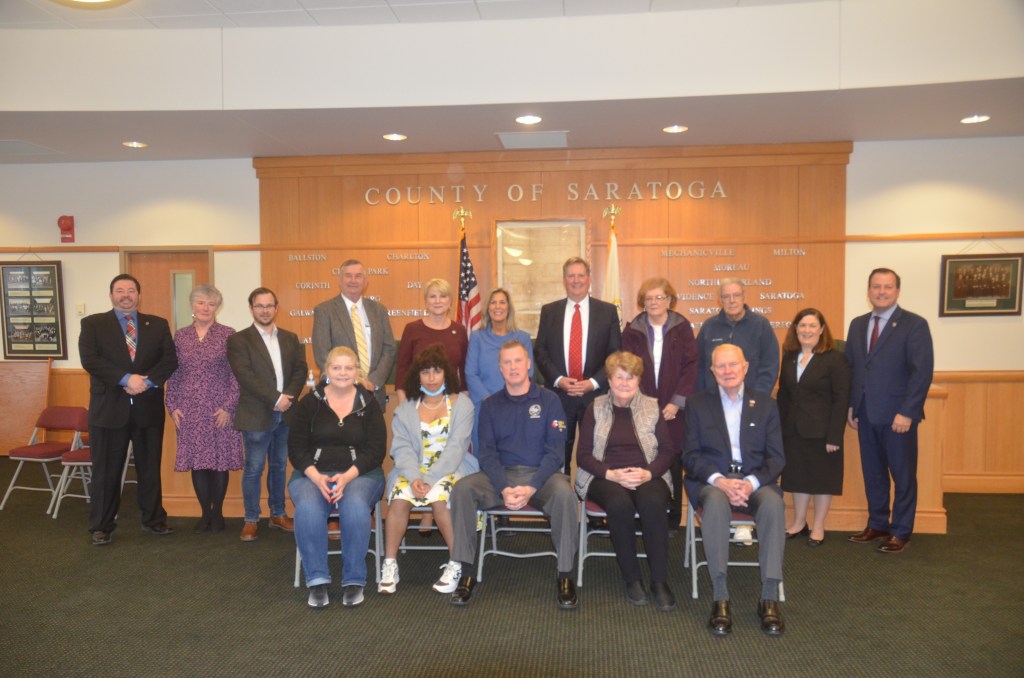 BALLSTON SPA, NY – Saratoga County relaunched its Honoring Our Deceased Veterans program this month, recognizing Robert G. Mitchell for a lifetime of service to his country, county and community.

Mitchell, who founded the Honoring Our Deceased Veterans program while serving as director of the Saratoga County Veterans Services Agency, was the first to be honored upon returning from monthly ceremonies, which were temporarily halted in due to the COVID-19 pandemic.

Speakers at the recent ceremony, held in the chambers of the Saratoga County Board of Supervisors in Ballston Spa, marveled at Mitchell’s extensive record of service.

Mitchell eventually landed what he called his “favorite” job running the Saratoga County Veterans Services Agency. In this role, he was instrumental in coordinating a number of county initiatives to support and honor veterans, including the establishment of the Honoring Our Deceased Veterans program in 1999, hosting the Moving Vietnam Memorial Wall and military and veteran appreciation concerts at Saratoga Performing Arts. Center.

At the ceremony, Saratoga County Board of Supervisors Chairman Todd Kusnierz declared November 16, 2021 in honor of Mitchell’s memory.

“How fitting that we recognize the individual, the veteran, who started the program here in Saratoga County,” Kusnierz said before reading the proclamation.

Saratoga County Veterans Services Agency Director Frank McClement spoke personally about how Mitchell helped his father receive veteran’s benefits and how it inspired him to pursue later. a career in the agency. “It meant so much to us and to all the families,” McClement said of Mitchell’s service as an advocate for local veterans and their families.

“What Bob meant to the veterans of this county, I don’t think we could ever really really repay Bob – but the thing is, if we tried, he wouldn’t take it,” McClement said. “It was Bob, and we are grateful to him for that.”

The Honoring Our Deceased Veterans program will resume its regular monthly schedule beginning in January 2022. Ceremonies will be held at 2 p.m. on the third Tuesday of each month at the Saratoga County Board of Supervisors Chambers, located at 40 McMaster St. in Ballston Spa. .

For more information about the Honor Ceremony for Departed Veterans, contact the Saratoga County Veterans Services Agency at (518) 884-4115.