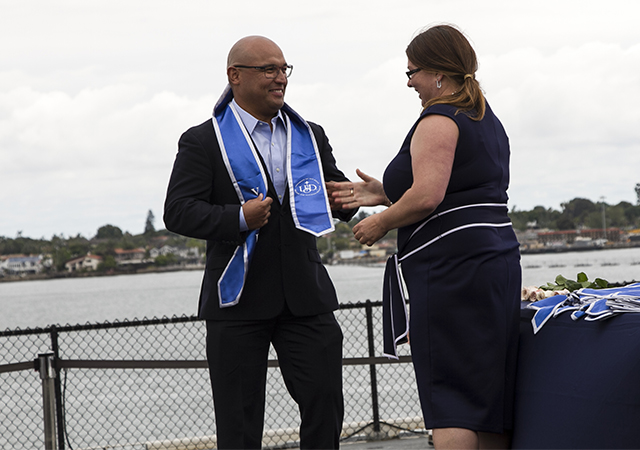 A blustery, overcast Thursday in San Diego was no match for the festive elements on display aboard the USS Midway as the University of San Diego’s Military and Veterans Program (MVP) held a recognition ceremony for honoring 45 military-related men and women who will be among 219 military-related graduates who participated in SHU’s kick-off exercises later this month.

The presentation of the special graduation stoles took place as Etter wrapped them around each graduate’s neck and they were congratulated by President Harris and Herbert.

Etter took the opportunity to speak out publicly thanks to a few strong partnerships MVP has formed on campus.

Etter honored the USD Career Development Center for his work with military-related students. She expressed her gratitude to Kacy Kilner Hayes, Assistant Dean of Graduate Programs at the USD School of Business, for helping her secure a funding award from the USD Envisioning 2024 strategic initiative to launch a USD military hub. Etter also thanked SHU’s Senior Director of Foundation Relations, Annette Ketner, for her and her team’s unwavering support of the MVP program.

To learn more about the SHU Military and Veterans Program, please visit their website.

The charity “Hearts and Homes for Veterans” helps veterans in need