Over the past year, the Town of Marco Island has embarked on two major projects to improve the town’s infrastructure. Like many projects, these infrastructure projects sat in the planning stage for decades, until the city solicited bids and awarded contracts.

In this edition, we’ll take a look at one of these two projects, to provide an understanding of both the history and current status of the project. The second infrastructure project will be highlighted in the next edition of Coastal Breeze News.

Purchase of the Glon property

One of Marco Island’s oldest infrastructure projects is the Veterans Community Park, located on land that was once known as the Glon property. Shortly after Marco Island was incorporated, the city had the opportunity to purchase the Glon property. In a referendum vote, the citizens of Marco chose to purchase $10,000,000 of land as they looked to the future of the island.

The city’s purchase of the property made it one of the last remaining areas on the island that could be used for public gatherings, rather than commercial development. 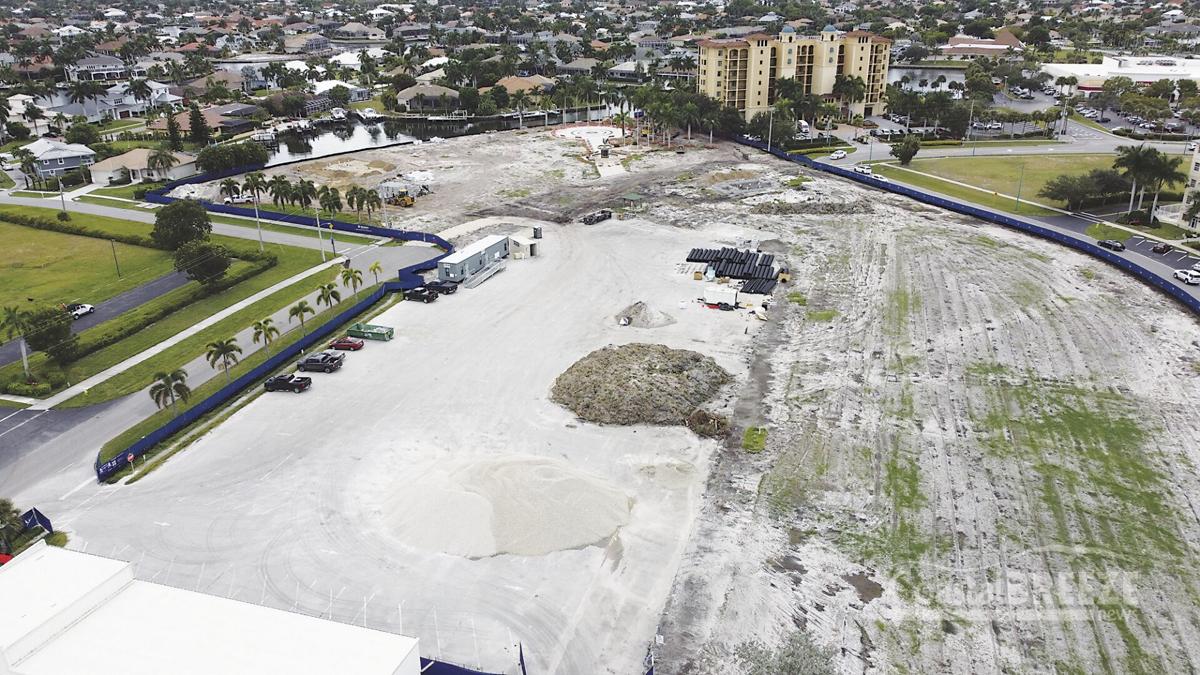 Public use of the park

Following the removal of construction debris from the controversial Septic Tank Removal Program (STRP) and the upgrading of Collier Boulevard, citizens enjoyed the property’s first real public use at the annual Ceremony and Celebration of Christmas tree lighting. The Christmas Island style committee requested the use of the newly grassed area for the lighting of the Christmas tree, when the popular event moved beyond its original location at the downtown shopping centre.

Since that time, approximately 3,500 residents and guests gather at Veterans Community Park each year for the annual Christmas tree lighting ceremony and celebration. Last year was an exception, however, as the event was canceled due to COVID precautions. (This year, with construction underway in the park, the annual tree lighting celebration will take place at Mackle Park.)

Using the area for the seasonal Farmer’s Market is another successful venture, which continues to grow and thrive in the park. Held every Wednesday from November to the end of April, it is also one of the most anticipated events of this period.

The park served as the setting for the annual Seafood and Music Festival, a major event that has taken place there for many years. This annual three to four day event is sponsored by the island’s two Rotary clubs and the Kiwanis club as one of the major fundraisers to support their philanthropic efforts on the island.

The Veterans Community Park has hosted several other events, such as fundraisers for the YMCA, Erin’s Sons and Daughters, various arts and crafts fairs, and city-sponsored concerts.

The local VFW created a fundraiser that successfully created the park’s original veterans memorial. The memorial is located in an area of ​​the park that was part of the original master plan and for which the city spent $100,000 in 2008. The Veterans Memorial was dedicated on November 11, 2011 at the Veterans Day Community Gathering veterans to thank its veterans for their service.

The American Legion Post (established after the local VFW post was absorbed by a post in Golden Gate) continues this effort. As a result, the Liberty Fountain was erected and other minor improvements were added over time.

Veterans Community Park has hosted the Vietnam Memorial Wall tour three times, drawing thousands to Marco Island to see the mock-up of the same memorial that stands in Washington, D.C.

In 2018, after a new board was put in place, they voted to spend an additional $100,000 to revise the park’s original plan, created by Kimley-Horn. In 2019, the city council again heard from Kimley-Horn representative James Pankonin regarding the updated vision for the property, which had been purchased 20 years earlier. Amazingly, the original vision, created a decade before, would essentially remain the same. In 2021, councilors voted to use a “construction manager at risk” process, hiring Manhattan Construction to oversee the project. Once again, the city engaged Kimley-Horn to work with Manhattan Construction to develop construction plans for the project.

Earlier this fall, work began to prepare the site for the estimated year-long project to develop the park. It is expected to be ready in late fall 2022.

The cost of Manhattan Construction’s contract to serve as Construction Manager at Risk is $11,183,647.00. An additional $713,700.00 was paid for work done on the second master plan, plus construction document creation work by Kimley-Horn. The 2008 master plan documents cost the city an additional $100,000 when they were created. This will cost the park just under $12,000,000, assuming there are no unforeseen circumstances.