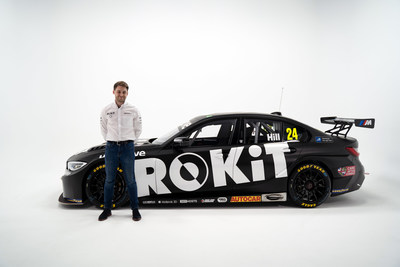 LONDON, October 28, 2022 /PRNewswire/ — Co-founded by Jonathan Kendrick and Jean-Paul DeJoriathe ROKiT group of companies has a long history of supporting military veterans in the US and UK and as part of this is supporting the UK charity Care after Combat this year to help some of the forces most vulnerable veterans British armies, and their families, through their ROKiT Foundation.

This support will continue until 2023, ROKiT announced.

Care after Combat provides support for the well-being of former members of the UK Armed Forces in the criminal justice system, through a one-on-one mentoring program inside and outside prison, with the mentors themselves veterans. Care after Combat works with individuals to get them where they deserve to be in society at large and to reduce recidivism rates.

In addition to its direct financial support, ROKiT has also placed the Care after Combat logo on the ROKiT MB Motorsport BMW 330e ‘ROKiTship’, driven by Jake Hill third place overall in the British Touring Car Championship (BTCC) this year, to raise awareness of the work undertaken by the charity.

Commenting, Jonathan Kendrick said, “We have seen the incredibly effective work that Care after Combat has done this year in mentoring several hundred military veterans who end up in the criminal justice system and we have been extremely impressed with the results. This kind of giving back is exactly why we have created the ROKiT Foundation and we are excited and proud to continue our support of Care after Combat next year in the very important work they do.”

Adrian KirkCEO of Care after Combat, said, “I am absolutely delighted that Jonathan has agreed to continue supporting Care after Combat for another year. In 2022, with the generous help of ROKiT, the charity has significantly increased its reach and the number of veterans supported by Care after Combat has grown sharply from around 300 at the start of the year to over 500 now.Without selfless support such as that of ROKiT, we as a charity could not provide essential care and advice. which our most vulnerable armed forces veterans need and deserve. ROKiT’s contribution has a direct impact and a positive impact on the lives and chances of those we support. The entire Care after Combat team and myself We are extremely grateful to Jonathan and extremely proud to have ROKiT by our side for another year.

In addition to Care after Combat, the ROKiT Foundation has also helped others, including the safe and successful evacuation of Afghanistan – and accommodation in Pakistan – of the 135 players and their immediate families of the Afghan women’s junior football team last year, before their relocation, as well as the recent deployment of out-of-home wi-fi for the inhabitants of Barbuda.