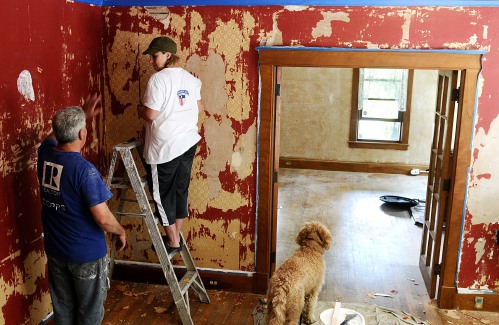 Hanover – A Hanover nonprofit created to help military veterans has gone into receivership while its assets are being liquidated after state authorities determined donations were misappropriated by some of those responsible for their personal use.

New Hampshire Attorney General Gordon MacDonald announced on Thursday that some Project VetCare administrators “have been removed from their positions” and that they and others involved in the misuse of money of the organization, reached an agreement “to have some of these funds restored”. .”

The investigation by the state’s Charitable Trusts Unit, which oversees charities in New Hampshire, found “the misappropriation of large sums of money for the benefit of the charity’s executive director, her family, an employee and certain members of the board of directors”. The Hampshire Attorney General’s Office said in a statement released Thursday afternoon.

Danielle Goodwin, the former executive director, embezzled money to pay for a vacation on Royal Caribbean Cruise Lines, a new heating system at her Kingsford Road in Hanover, as well as ‘benefit payments’ for her- same and her children and a loan to her son, according to the state investigation.

The investigation also revealed that donations from the organization were used to pay for a Toyota van for Project VetCare co-founder Robert Chambers, as well as an allowance for his daughter. The funds were also used for a $47,000 loan to Gavin Goodwin, husband of Danielle Goodwin and director of Project VetCare, according to the preliminary report from the attorney general’s office. There was also a loan of over $2,100 to council member Dana Pirovane

“This charity was created to support the brave men and women who have served our country,” MacDonald said in a statement. “Some leaders of this association have enriched themselves at the expense of the veterans they were responsible for helping. … It is a deeply disturbing breach of trust that funds raised in their name were instead diverted for cruise vacations, household expenses and tens of thousands of dollars in predatory loans to administrators.

Rumors about the five-year-old nonprofit started circulating in the Upper Valley nonprofit sector earlier this year when representatives from Project VetCare approached other nonprofits to buy a property on Lebanon Street, originally acquired as a residence for veterans attending Dartmouth College.

When it launched, Project VetCare, which operated from a second-floor office on Hanover’s Main Street, attracted strong support from veterans in the Dartmouth community – several who served on its board of directors or have volunteered — as well as the Jack and Dorothy Byrne Foundation, which gave the organization a total of $880,000 in 2014 and 2015, according to IRS filings.

The Byrne Foundation’s bequests were among the largest gifts she made in each of those years.

According to its organizers, in its brief existence, Project VetCare has helped hundreds of veterans in the Upper Valley and beyond who needed assistance with everything from accessing health benefits to fight against evictions and foreclosures.

He bought a backpacking house in 2014 about half a mile from Dartmouth for $475,000. The Lebanon Street house was to serve as a residence and retreat for veterans attending Dartmouth.

In 2014 and 2015, the non-profit organization attracted attention when it tried – unsuccessfully – to obtain funding from the city during Town Meeting.

Danielle and Gavin Goodwin could not be reached for comment on Thursday.

Pirovane did not respond to a message sent via Facebook on Thursday evening.

The Charitable Trusts Unit said it was investigating after receiving a tip in March 2016 from an unidentified source that Project VetCare had paid for oil deliveries and repairs to the Goodwins’ home. Investigators found that in addition to nearly $2,800 of Project VetCare funds used for oil deliveries and repairs, approximately $24,600 was used to install a new heating system and fuel deliveries.

Investigators from the Charitable Trusts Unit said they disclosed the discovery of the misappropriated funds to Chambers at a meeting in May 2016 and advised trustees to “take action”.

In a conference call later that month between Charitable Trust Unit officials, Chambers and “three other trustees”, the Project VetCare group in turn told investigators they had discovered Goodwin had used the funds of the organization for the vacation trip to Florida, according to the report.

However, when the Project VetCare board met a few days later to vote on the recommendations of the Charitable Trusts unit leaders, a majority of the board – Chambers, Danielle Goodwin, Gavin Goodwin and Pirovane – voted against the measures, according to the report.

The three directors who voted in favor of proposals to hire a lawyer and an accountant to further investigate Danielle Goodwin’s dealings – John Donovan, Andy Steele and Mark Parton – all resigned the following day, according to the report.

At the same board meeting, according to the report, Danielle Goodwin also revealed that she received “stipends” instead of a salary from Project VetCare and that the nonprofit gave grants. loans to two of its directors and a car loan of $15,000. to Mindy Bergman, staff member.

Bergman did not respond to messages left on his voicemail.

“It also emerged that Mr Chambers had received payment from PVC for helping the organization raise funds,” the preliminary report said. “None of these conflict-of-interest transactions were approved by a vote of the board of directors, as required” by state regulations, according to the report.

Investigators also uncovered Project VetCare’s purchase of a second property – a dilapidated two-bedroom, one-bath residence at 273 Heater Road in Lebanon “in need of full rehabilitation”, according to its website listing. real estate.

The Hanover house and the Lebanon property have recently sold, according to estate agent Carol Shepherd of Grantham’s CG Shepherd Realty, whose company has listed the properties.

When Project VetCare officials refused to take the advice of state investigators, the Charitable Trusts Unit filed a lawsuit in Grafton County Superior Court in June 2016, asking a judge to force the removal of the officers and directors of the nonprofit organization and placing the organization in the hands of a receiver.

The court granted the motion the same day.

Following the settlement of the claims, the Charitable Trusts Unit received financial restitution from the principals who benefited from the transactions.

Danielle Goodwin is required to repay $90,000 when selling her Hannover home, which is listed for $899,000. A sale is now “under contract”, according to the report.

The preliminary report from the Attorney General’s office indicates that all proceeds generated from the sale of Project VetCare properties, in addition to the money claimed through restitution, will be donated to upper valley organizations serving veterans.

Thomas Donovan, director of the Charitable Trusts Unit, along with John Gilbert of Synchrony Advisors in Exeter, NH, the organization’s receiver, will evaluate the proposals, make a recommendation and submit it to the court for approval.

“At that time, the PVC will be dissolved,” the preliminary report said.

John Lippman can be reached at jlippman@vnews.com.