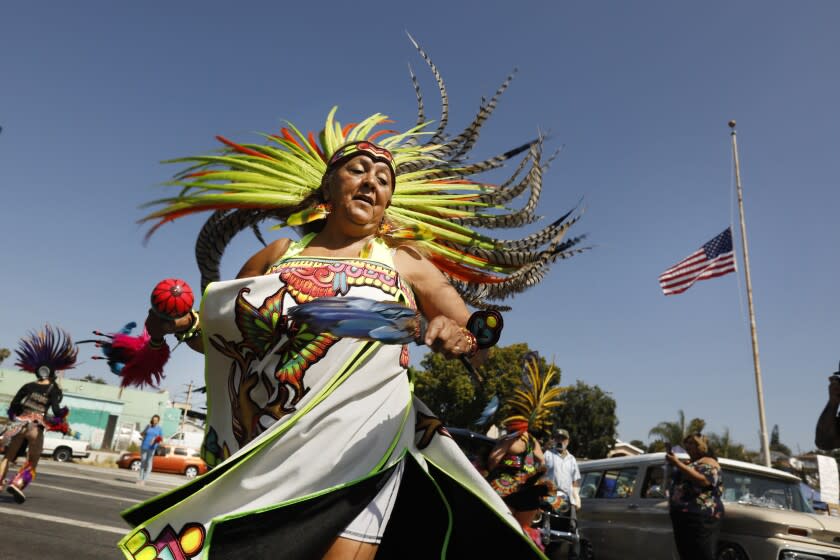 There were performances of tap dancing and the national anthem. Military veterans and their families protested on one side of the street, then marched to a city memorial event at the opposite end of the busy East Los Angeles-Boyle Heights Cinco Puntos intersection on Memorial Day .

At the heart of the protest is the controversial plan to relocate an iconic memorial dedicated to the men and women of Mexican descent who gave their lives in service to their country. Community members, veterans and politicians gathered Monday for a 75th anniversary celebration near the 30-foot-tall marble monolith, which was dedicated on May 30, 1947.

But the relocation project is not the only controversy around the monument. Even his name has long been in dispute.

Vietnam War veteran Eddie Morin, 79, said the monument, inscribed with a dedication to veterans of World War II and the Korean and Vietnam wars, is known as the Americans Memorial of Mexican descent. Morin’s father, Raul Morin, a WWII veteran and authoris honored with a plaque located in a separate small triangular plaza directly south of the monument across East Cesar E. Chavez Avenue, named “Morin Memorial Square”.

“It was always about venerating the efforts of Mexican Americans since World War II,” Morin said of the monolith and Place Morin. “But it’s not only related to the war, but also to our segregation during the war years and our efforts. It is a refutation of all the racist stereotypes against us.

Tony Zapata, 77, another Vietnam veteran and organizer of the city’s memorial, disagreed with the name and said he and other veterans and friends called the monument the Mexican American Memorial of every war for as long as he can remember.

“We both say it’s a monument to Mexican Americans,” Zapata said. “I just don’t understand why there is a dispute with the official name.”

Preliminary plans for the move released by council member Kevin de León’s office identify the structure as the Mexican All Wars Memorial. According to the plan, the monument would be moved about 50 feet from its current position in a newly created roundabout at the intersection of Cesar Chavez Avenue and Lorena and Indiana streets.

Since the memorial would be located in the middle of the roundabout, the currently available pedestrian access would be non-existent. Some properties along Cesar Chavez Avenue, including a Tortilleria La Gloria Foods, were purchased through eminent domain and will be demolished to make way for the roundabout.

The Morin Memorial Square, which includes a stone slab with a bronze plaque honoring Raul Morin as well as a pair of rotting wooden benches, a flagpole and a circular stone patio, would be moved to the other side of the street to the southwest, according to the plans. It would be placed near other plaques honoring Congressional Medal of Honor recipients as well as veterans of the Vietnam War and World War II.

As controversy continues to swirl around what the square should be called, many of those who visited on Monday agreed that the proposed relocation would only add to the community’s problems.

“This was all done behind our backs,” said Sofia Quinones, an organizer for the East Los Angeles Boyle Heights Coalition. “The property was taken by eminent domain and plans were drawn up without community input.”

Quinones said he collected 6,000 signatures against the plans and tried to get the attention of local authorities.

However, information on project financing and a construction schedule were not available, according to De León’s office, which is still investigating the matter. There was also no information from the office as to whether Evergreen Cemetery or the famous Los Cinco Puntos carniceria would be affected.

De León said much of the work and planning for the roundabout has been done by his predecessor, José Huizarwho is awaiting trial on extortion charges which he denies.

“It was an authorized project decades ago and I’m aware of the controversy, but I haven’t had time to really review it and finalize it,” De León said.

Los Angeles County Metropolitan Transportation Authority dedicated $8 million from 710 Freeway funds to the project, while the Los Angeles Department of Public Works previously said another $10.9 million has been set aside from Proposition C funding.

De León staff, however, said the roundabout was needed to improve traffic flow and safety, as there had been 27 accidents at the Cinco Puntos intersection in the past five years.

Quinones countered that since the three streets did not have an uneven flow of traffic, a roundabout made little sense.

Robert Castillo, 91, a Korean War veteran and former Army paratrooper, was furious that the memorial would be hit.

“I’m against it,” said Castillo, who grew up in East Los Angeles and lives in Whittier. “If the monument is moved to the middle of the roundabout, how will people like me be able to walk there and lay a wreath?”

Vietnam War veteran Al Lims, 75, said there was too much confusion to move the project forward.

The protest began around 10:20 a.m. and included speeches by several veterans and community members against the project. It ended around 11:15 a.m., about 15 minutes after the annual meeting commemoration ceremony near the marble monument has begun.

Protesters took signs reading “No Roundabout” and “Save Cinco Puntos Hallways” from Morin Memorial Square to the commemoration event. At one point, a trio of protesters, led by Quinones, marched across the front of the memorial stage with a large banner as Assemblywoman Wendy Carrillo (D-Los Angeles) spoke.

“It’s important for politicians to know how we feel,” Morin said. “We don’t want any change.

Area veterans gather at Willows in RN to see the program

Veterans and community members visit the Healing Wall in Chisholm