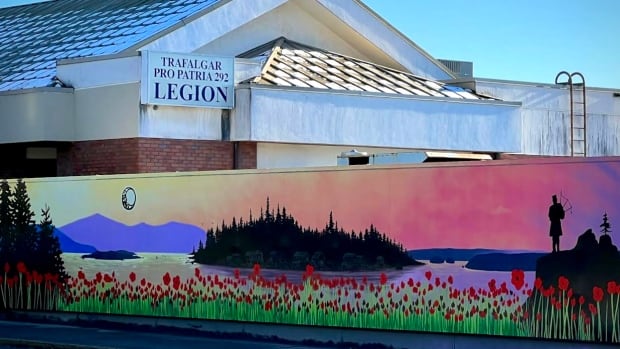 This year, the Trafalgar Pro Patria Legion in Victoria is honoring Remembrance Day with a colorful approach.

Their once graffiti-filled wall is now adorned with a mural that commemorates Legion veterans while illuminating a busy stretch of road in the Burnside district.

On a gradient of yellow to purple, the mural features a field of poppies with the silhouette of a bagpipe player facing the creek.

References to the Indigenous community are also visible throughout the piece, such as in the moon overlooking the stage – details requested by Rachell Westman, coordinator of the Burnside Gorge Graffiti Fighters, for inclusivity, she says.

Westman says she approached the Legion to ask if she would be willing to have a mural painted on the wall outside her headquarters.

She says she hopes it will inspire community resilience and make the neighborhood safer.

“[The Legion] had a huge [graffiti] tag all over the wall,” she said. “There’s not a lot of vibrancy to that part of the street, and we really felt it needed something to liven it up.

She adds that actively engaging with the community to get feedback during the painting process made the experience more fruitful and helped prevent vandals from painting over the artwork.

More than a work of art

Artist Kelly Everill says the mural is one of the projects she is most proud of – tied for first place with another mural she did, honoring Courtenay Legion veterans.

“My dad was in the service, as was his dad, and my husband was too,” Everill said. Her father died a few years ago, she said.

“It’s just so important with everything going on in the world today that people know that these veterans fought for our freedoms.”

Beyond its bright and soothing imagery, the mural brought a sense of pride to the community, according to Laurie Weston, director of the Trafalgar Pro Patria Legion branch.

“It really gave people goosebumps, tears in their eyes, and poppies, it said it all to our veterans,” she said.

“It spoke to them and they are eternally grateful.”