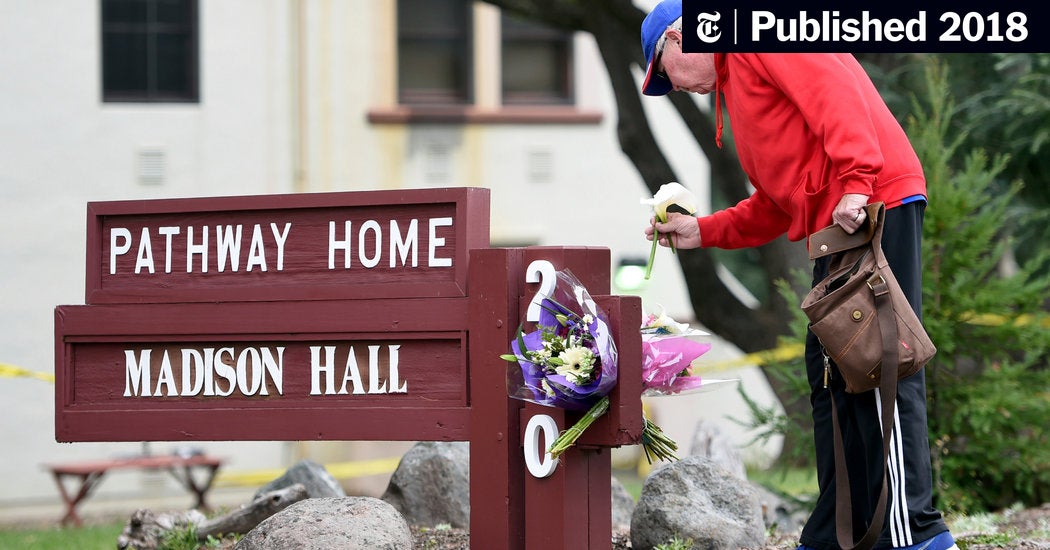 Violence hits a veterans program that worked to prevent it

YOUNVILLE, Calif. — The Pathway Home, a California program that treats struggling veterans, is part of a large 19th-century veterans’ complex surrounded by Napa Valley’s famous vineyards. Its mission-style buildings and mature stands of redwoods are worlds apart from the deserts and mountains of the Middle East where many of its people fought and left parts of themselves behind.

On Friday morning, Albert Wong, an Afghanistan war veteran and alumnus of the program, walked onto campus with at least one loaded rifle. Hours later, he and three Pathway personnel whose job it was to help service members reintegrate into society were found dead, and Pathway had suffered the kind of tragedy it was meant to prevent.

Mr Wong, who until two weeks ago was receiving care at home, arrived at a going away party for two staff members, according to Larry Kamer, a spokesman for the organization.

Mr. Wong ordered the veterans out of the room and held three employees hostage.

“He was very calm,” said Mr. Kamer, who said his description was based on observations from his wife, Devereaux Smith, director of development and communications for the association, who was in the room. “He didn’t say much.”

Mr. Wong exchanged gunfire with a deputy from the Napa County Sheriff’s Office, but it is not known whether he was injured. Her body was discovered when police raided the meeting room on Friday, along with the bodies of Christine Loeber, executive director of Pathway; Dr. Jennifer Golick, Staff Psychologist; and Dr. Jennifer Gonzales, a psychologist who was pregnant with her first child.

Mr. Kamer and John F. Dunbar, the mayor of Yountville and a member of the board of directors of Pathway, declined to give further details about Mr. Wong or why he left the house.

“He was separated from the program about two weeks ago,” Mr. Kamer said. “I don’t feel comfortable saying more about the circumstances.”

Mr Dunbar described the shooter as ‘one of our heroes who clearly had demons which led to the terrible tragedy we have had here’.

It is still unclear what these demons were. Mr. Wong served as an Army specialist in the infantry. He joined the Army Reserve straight out of high school in 1998, for an enlistment that ended in 2002. He joined the Army on active duty in 2010 and deployed to Afghanistan in 2011 for a year. Army records show that during this time he was exposed to combat and was also honored for his good conduct. He was discharged in 2013, well below the four years that constitute a typical enlistment. The military declined to comment on the reason for his release.

The Pathway Home, a nonprofit that rents a building in the state-run Veterans Home of California-Yountville, was established a decade ago to help veterans who “had reached a state of crisis “, according to Mr. Kamer.

Many residents have only recently returned from fighting in Iraq or Afghanistan. They sleep in the beige building that overlooks the central courtyard of the veterans’ complex, which dates from 1884 and runs up the hill like a college campus.

The goal of the Pathway program is to counsel and integrate veterans into civilian life with the help of the tight-knit community of therapists and staff members. Ms. Loeber, the program manager, sometimes slept in her office, said Mr. Dunbar, the mayor.

“Part of the program was fishing, bowling, going out into the community,” Dunbar told reporters at a Saturday news conference. “In some cases, our warriors needed to be reintegrated into society. This includes being in crowded rooms, in confined spaces, areas where there were loud noises.

Craig Bryan, a psychologist at the National Center for Veterans Studies at the University of Utah, said veterans with post-traumatic stress can become violent and therapists were often trained in escalation. But they can be caught in a Catch-22, he said, in which continuing treatment with an increasingly aggressive patient is potentially harmful for both parties, but so is ending treatment.

“I certainly was scared of being collateral damage at times,” Mr. Bryan said.

The Pathway program is separate from the Veterans Home, which houses about 900 people, mostly seniors and veterans of previous wars – Vietnam, Korea and even World War II.

“It’s great here,” said Bob Abbott, 75, a retired painter who served in the Mekong Delta in 1969 and has lived on campus for three years.

Veterans can spend days at the nearby golf course. They strike at the bowling alley, prune geraniums in their wine barrel planters, and visit nearby restaurants and wineries.

But on Friday, the idyllic routines were disrupted by a sound some locals quickly recognized from their past lives: an air siren.

Staff told residents, incorrectly, that a shooting had occurred in the dining hall, which is next to the Pathway building, and ordered them to lock themselves in their buildings, Mr Abbott said.

“It was a complete shock,” he said. “We’ve never had anything like this before.”

Austin Blake, a 59-year-old ex-Army tank operator, said he sometimes met the men on the Pathway program and was struck by their youth.

Mr Blake, who is a representative of the Allied Council, a governing body of the veterans home, said veterans were used to death in Yountville, but usually those from natural causes.

Pathway staff met on Saturday to decide on the future of the organization and how to commemorate their fallen colleagues.

“They lived their lives selflessly,” Mr Dunbar said. “Each of them brought energy, vitality, personality to their work.”