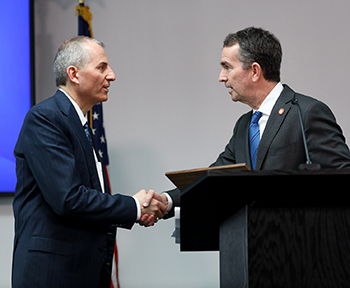 Administered by the Department of Veterans Services, the V3 program is designed to connect Virginia veterans to the workforce, assisting in the recruitment, hiring, training and retention of military veterans in civilian jobs.

“As a veteran, it is important to me that Virginia welcomes and supports the men and women who have served in our armed forces,” Northam said in a statement. “Veterans learn valuable leadership and other skills during their military service, and V3 helps connect them with businesses that can benefit from their abilities and talents.”

Virginia has more than 700,000 veterans, and Northam has set a goal of 65,000 V3 hires during his tenure. The program has helped 59,000 Virginia veterans find civilian employment since 2012, with 28,400 being hired during Northam’s tenure and an additional 700 employers pursuing V3 training and certification.

Not all organizations are eligible to be in the V3 state program, which requires employers to commit to hiring veterans based on company size. V3 companies are eligible for grants of up to $10,000, with $1,000 awarded per eligible veteran hired.

Carahsoft has over 1,000 employees and has generated $5.6 billion in revenue since its inception in 2004.

“Carahsoft was honored to add veterans, guardsmen, reservists and military spouses to our team, which now numbers more than 1,400,” Carahsoft President Craig P. Abod said in a statement. “Through the V3 program, we will accelerate our efforts in this area, as the military plays a critical role in building a skilled and capable workforce to meet the needs of our public sector partners.”

The winner of Virginia Business’s 2020 Best Workplaces for Small Business was Patriot Group International Inc., which is also a V3 company. Three-quarters of Patriot Group’s 501 employees are veterans.

Tour de Force: Behind the Scenes of the Military Veterans Charity Tour